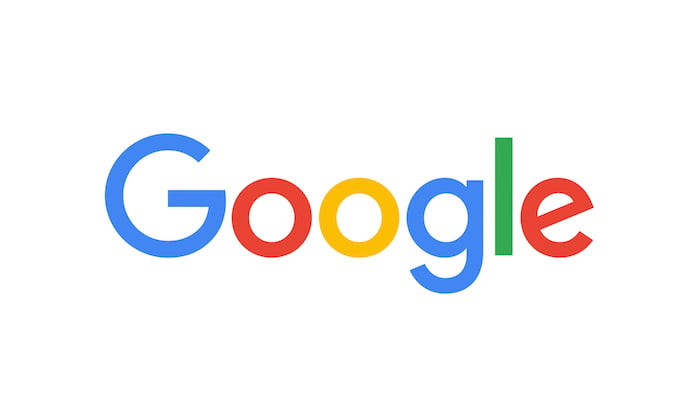 I donâ€™t think I am the best SEO out there. And I am not the most well-known SEO.

But when you have been doing SEO as long as I have, eventually you meet most of the players in the space.

And over the years, Iâ€™ve met a lot of Google employees. Some of them were in high positions, while others were not.

Out of all of the Google employees I met, none of them told me anything that shouldnâ€™t be made public. And I also never put anyone in a position that would compromise their job.

But what was crazy is that the SEO advice I got on August 4, 2015, from a Google employee changed my life.

And whatâ€™s even crazier is that the advice I got on that particular day, is probably known by almost every SEO out there, but I bet less than .01% of SEOs use this strategy.

In other words, a Google employee shared knowledge that was readily available on any major search blog, yet I was too lazy to implement what I already knew.

So what did I learn?

Well, before I go into what I learned, lets first share the results of this one SEO tactic. The reason Iâ€™m doing this is that if I just share the tactic with you, most of you are going to ignore it like I did.

But if I share the stats with you first, hopefully, youâ€™ll be more open to implementing what I am about to teach you.

So here are my traffic stats from August 2015 for NeilPatel.com: 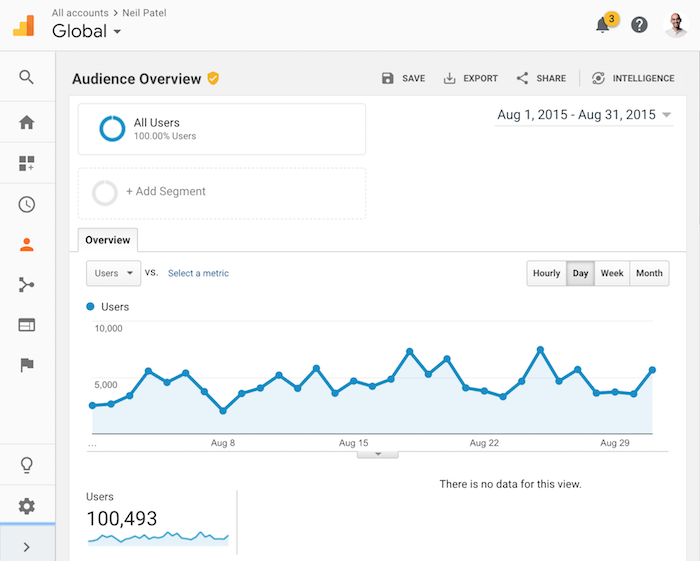 And here are my traffic stats for the trailing few months after I had learned this new strategy: 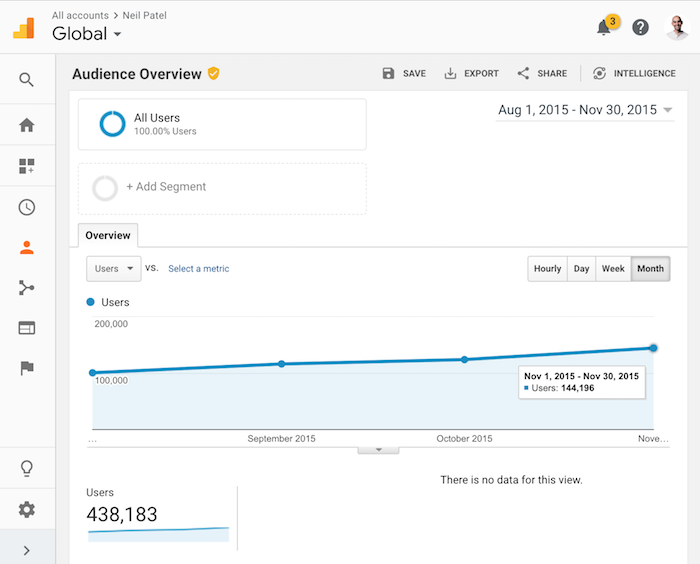 But here is the thingâ€¦ my traffic was naturally growing from all of my other marketing efforts. And I didnâ€™t even start implementing what I learned from Google until November 28, 2015.

And the results didnâ€™t kick in right away. It took over a year before I really started seeing growth. But once I hit the 21-month mark, things really started to skyrocket.

So, what was the big lesson?

Hereâ€™s the first one from NeilPatel.com: 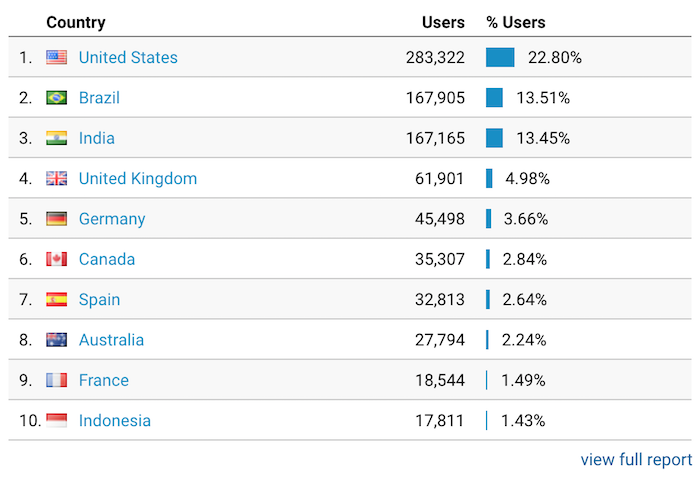 And hereâ€™s one from the KISSmetrics blog (which I now own â€“ Iâ€™ll blog about this another day): 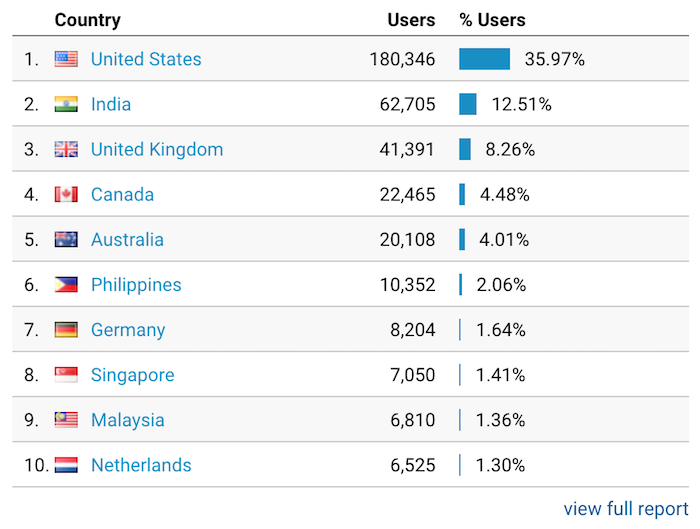 And hereâ€™s one from my older blog, Quick Sprout: 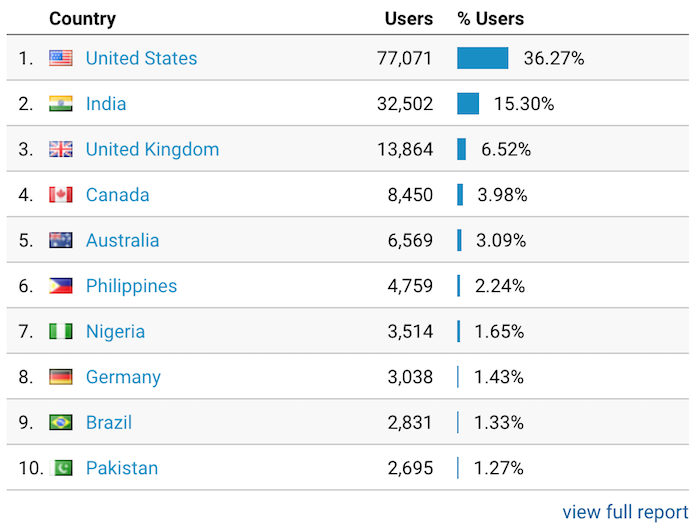 Whatâ€™s the big difference between them?

All three of the blogs are about marketing. The content is similarâ€¦ so whatâ€™s the difference?

KISSmetrics and Quick Sprout generate their traffic from roughly the same regions. But NeilPatel.com, on the other hand, generates traffic from regions like Brazil, Spain, and Germany at a much higher percentage.

So why is this?

Google told me to go multi-lingual

Itâ€™s hard to rank on Google.

No matter how many blog posts I write about SEO, most of you wonâ€™t rank well because it takes a lot of time and countless hours of work (or money).

But as my friend at Google once told meâ€¦

There is already a lot of content in English but not enough in other languages even though the majority of the people in this world donâ€™t speak English.

In other words, you need to translate your content.

On November 28, 2015, I published my first article in Portuguese (if you click the link there is a good chance it keeps you on the English site, so you may have to click the flag next to the Neil Patel logo and select Brazil after you click on the link).

I slowly starting to go after more languages because the strategy is working. Here are my traffic stats in the last 31 days in Brazil: 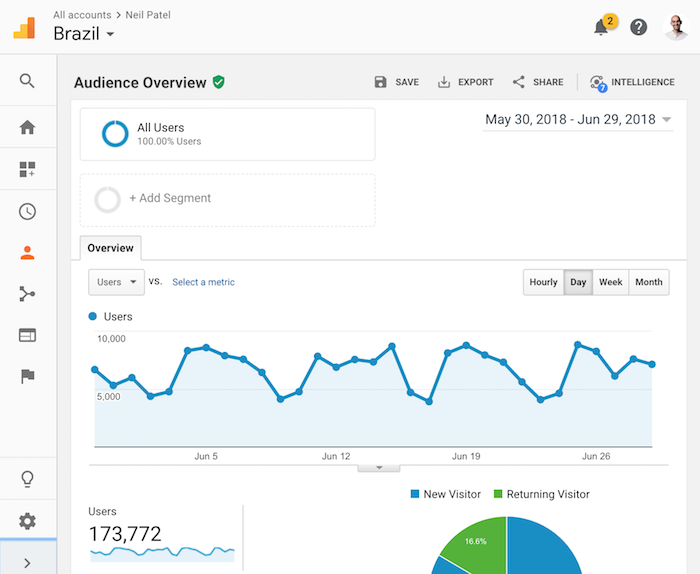 And here are the stats for German: 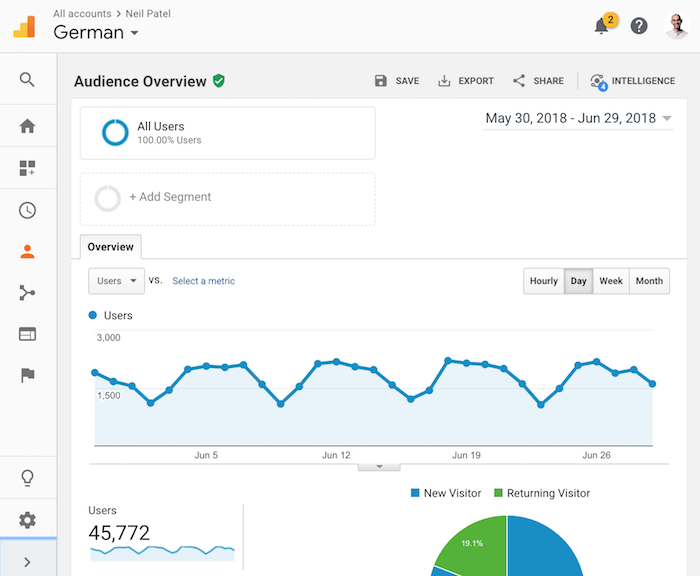 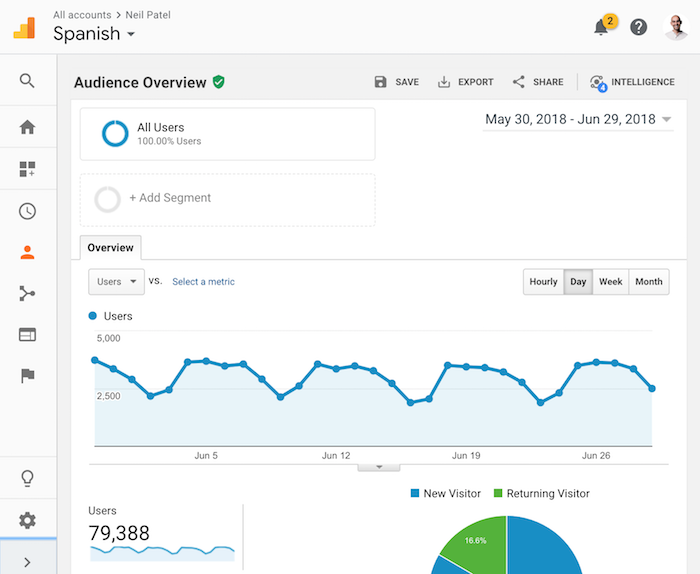 It takes time to do well within each region when you localize the content, but itâ€™s worth it because there is literally no competition.

And I know what you are thinkingâ€¦ people in many of these countries donâ€™t have as much money, so the traffic is useless and wonâ€™t convert.

If thatâ€™s what you are thinking then let me be the first to tell you that youÂ are way off!

You need to look beyond English!

Letâ€™s look at the most popular languages in the world: 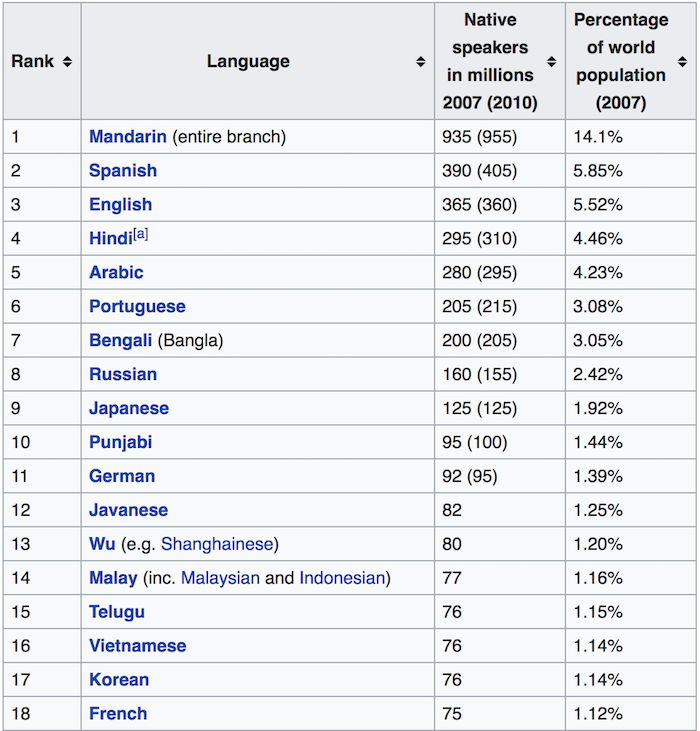 Now letâ€™s look at the countries with the largest populations: 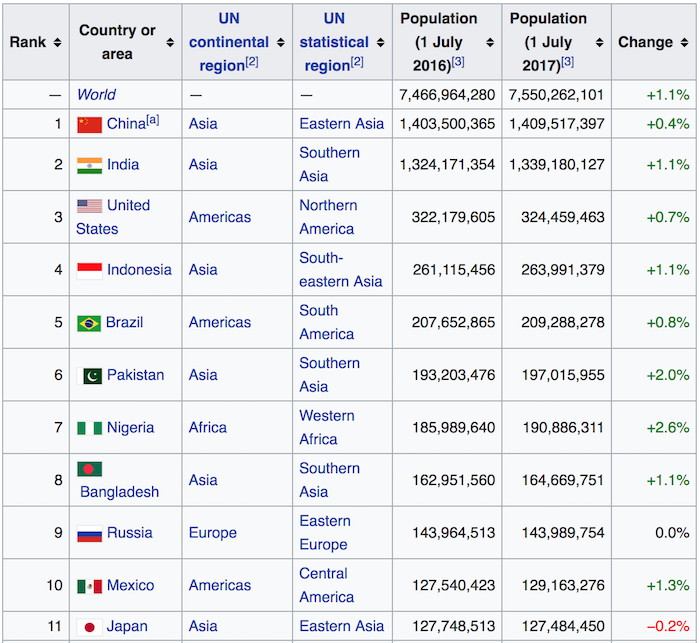 And lastly, letâ€™s look at GDP per country: 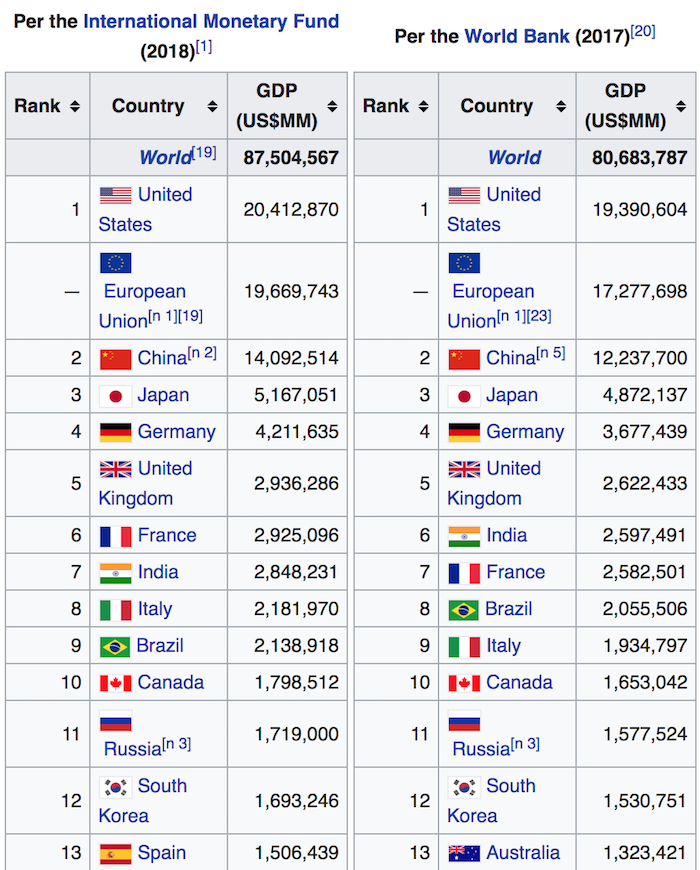 The data shows the majority of the world doesnâ€™t live in the United States, United Kingdom, Canada, or Australia.

There are so many other countries to focus on.

Not only is there a lot of people in regions like Brazil, but their GDP isnâ€™t too bad. And yes, there isnâ€™t as much money to be made in Brazil as there is to be made in the United Statesâ€¦ but in the U.S. you have a lot of competitors.

While in Brazil, itâ€™s much easier to dominate, which means you can probably make as much money in Brazil as you do in the U.S.

To give you an idea, when my ad agency expanded to Brazil, we generated over a million dollars in revenue in less than 12 months when I canâ€™t even speak one word of Portuguese.

Well, technically thatâ€™s a lie. I know enough Portuguese to order a water and tell the waiter that I don’t want salt on my food ðŸ˜‰

Just think of it this way, we were able to grow when only 3% of Brazilians speak English. That means I had little to no involvement, yet we still do decently well.

And my efforts look minuscule when you compare them to companies like Amazon. They keep investing in regions like India even though it keeps losing them money. They even announced how they are going to pour in an additionalÂ 2 billion dollars.

If you want to grow fast like Amazon, you have to start thinking big.

And international expansion should be one of those big thoughts.

Even if you arenâ€™t able to service some of these regions, whatâ€™s the harm in spending money to first build up your companyâ€™s brand and traffic in those regions? You can then worry about monetization later on.

But you better hurryâ€¦ time is running out.

During one of my trips to Brazil, I had a meeting with Andre Esteves. The meeting was only supposed to be an hour, but it lasted almost 3, which is a very long time considering he’s worth $2 billion. 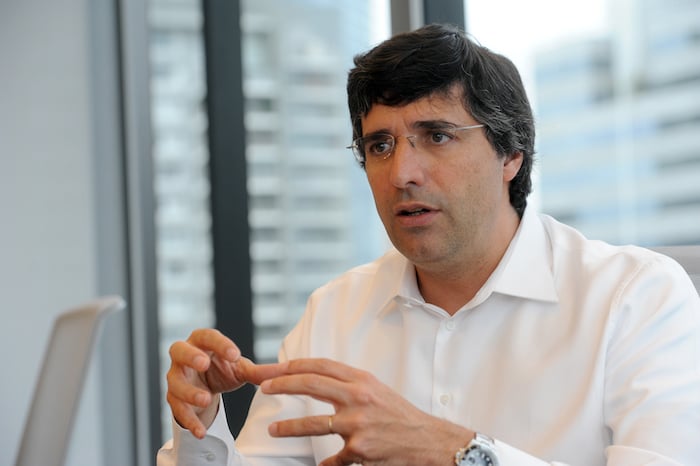 In that time, we talked shop, we shared stories from our personal life, he convinced me to stop investing in hedge funds, and to put all of my money back into the webâ€¦ and best of all — he explained how regions like Brazil are the wild west.

But he didnâ€™t mean that in a negative way. The opposite really.

Instead, he was just explaining how regions like Brazil have little to no competition and are growing fast. Those who are patient will make a lot of money in the long run.

He was spot on!

Itâ€™s why Google, Facebook, Apple, Amazon, and Microsoft focus heavily on internationalization. They all know you canâ€™t build a gigantic business if you only focus on the English-speaking market.

To give you an idea on how much energy these companies spend on globalization, one of my Microsoft friends (who’s an executive), broke down why Microsoft is trying to stop piracy in China.

If everyone in China stopped pirating Microsoft products and paid for them instead, it would add roughly 138 billion dollars to their market cap (according to him).

Now, of course, if they stopped privacy, not all of those people will pay for their products. But still, it just shows how much more money is to be made by Microsoft in China.

There is even a ton of money to be made overseas for you. You just have to be willing to make the bet.

Youâ€™ve already seen my traffic stats and you know Iâ€™m growing fast overseas. Iâ€™m not monetizing in enough of those regions and that will change as time goes on.

But I made the internationalization bet years ago, and I keep increasing the amount I spend each year.

Hereâ€™s how you expand internationally

Iâ€™ve done better in Brazil than Germany and all of the Spanish markets. Itâ€™s not because I started to go after Brazil first, itâ€™s because I had people on the ground in Brazil from day one.

It took me too long before I started to add people from those regions to the team and expand.

If you donâ€™t speak the language and you donâ€™t understand the culture you wonâ€™t do well no matter how good you are at marketing.

This was my biggest lesson I learned, you need people on the ground!

The second lesson I learned is translating your content isnâ€™t enough.

Even if you adapt the content to the region by adjusting everything, you still wonâ€™t be successful because people within each region maybe looking for something else.

For example, in the United States, companies are looking for me to write more advanced marketing content. In parts of Latin America, on the other hand, people are looking to learn the fundamentals of online marketing.

For that reason, my team had to start creating new content just for regions like Brazil. This helped tremendously. 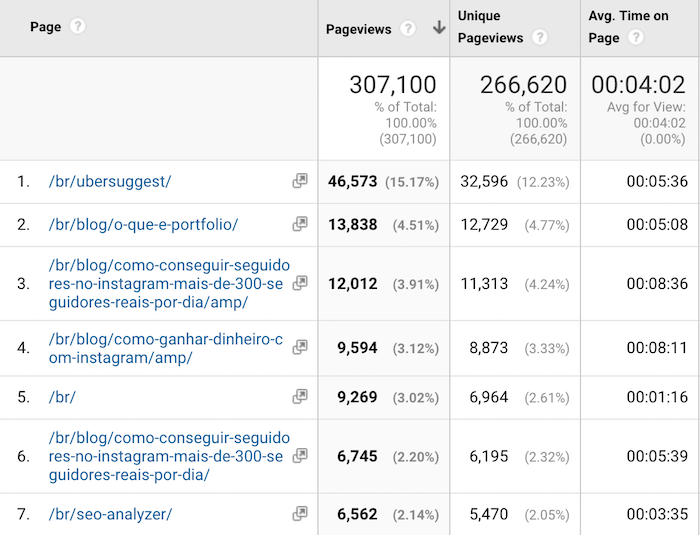 As you can see from the screenshot above, the most popular piece of content written for Brazil wasnâ€™t a translation (itâ€™s number 2 on the list, number 1 is a tool).

I rank #2 (behind Wikipedia) and before the YouTube results for the popular search termÂ portfolio:Â 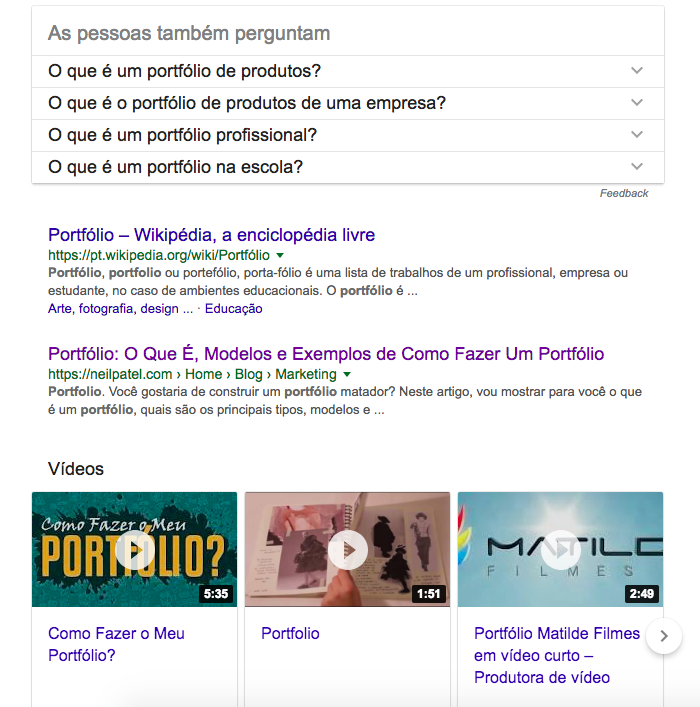 And that image above also gets me to my last point. You need to really build a brand in each region or else you wonâ€™t do well.

I speak at more conferences in Brazil than I do in Germany or any Spanish country.

Although people believe there isnâ€™t much money to be made from Brazil, I get paid $25,000 to $50,000 for an hour speaking spot every time I fly out there.

Eventually, I learned better ways to grow my brand internationally than speaking (as that isnâ€™t scalable).

I acquired the tool Ubersuggest for $120,000 as it has a lot of traffic from different parts of the world. Now I am improving the tool and expanding its functionality betting that in the long term it will bring me even more traffic and awareness.

I know the advice my Google friend gave me wasnâ€™t rocket science, but hey, it worked really well.

We tend to forget and even ignore the things that are staring directly at us.

We all know the majority of the world doesnâ€™t speak English, yet we all focus our marketing efforts on the English market.

If I were starting all over again, I wouldnâ€™t create a website in English. Instead, I would pick a region in Europe, like France or Germany, where it isnâ€™t as competitive and where their currency is worth more than the dollar.

Not only would I see results faster, but I would make more money because there wouldnâ€™t be as much competition.

And yes, it did take me a while to see results, but since then I have run many more experiments and if I had to start over again I would:

And I will leave you with one final thoughtâ€¦

Google doesnâ€™t penalize you for duplicate content. Translating your content and using hreflang wonâ€™t get you penalized.

Now, if you use an automatic translation software and your translations are done poorly, your user metrics will probably suffer and there is a higher chance youâ€™ll suffer from a Google penalty. So translate your content manually.

The post The Most Vital SEO Strategy I Learned Came From a Google Employee appeared first on Neil Patel.