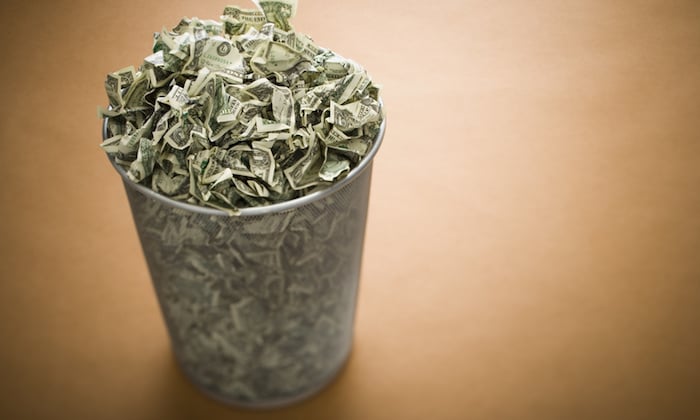 Youâ€™ve heard people telling you that you need to write in-depth content because thatâ€™s what Google wants.

And itâ€™s trueâ€¦ the average page that ranks on page 1 of Google contains 1,890 words. 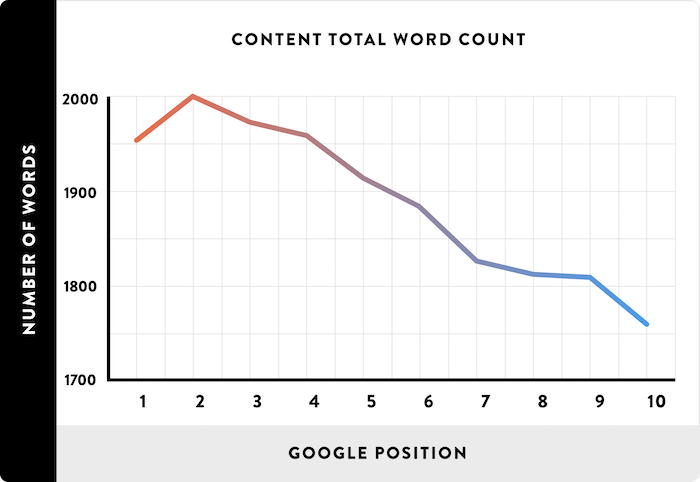 But you already know that.

Whatâ€™s funny is, I have done it all.

Iâ€™ve even tested out adding custom images and illustrations to these in-depth articles to see if that helps.

And of course, I tested if having one super long page with tens of thousands of words or having multiple pages with 4,000 or 5,000 words is better.

So, what do you think? How in-depth should your content be?

With Quick Sprout, it started off just like any normal blog.

Just look at my traffic during January 2011. 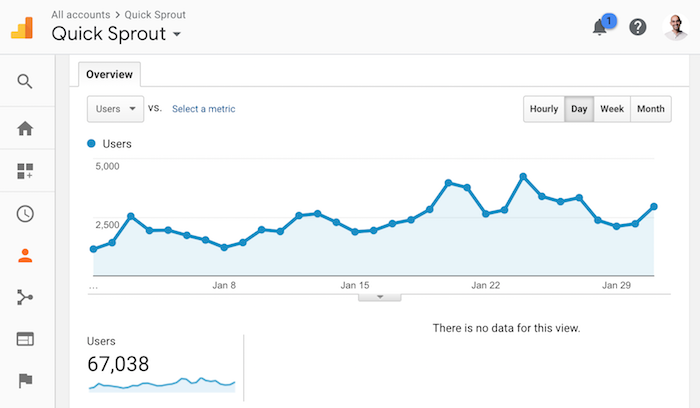 Even with the content being short, it did fairly well on Google over the years.

But over time, more marketing blogs started to pop up, competition increased, and I had no choice but to write more detailed content. 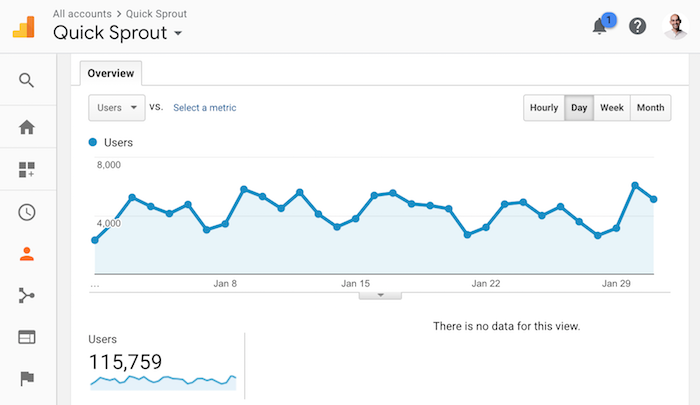 It was one of my best years, and all I had to do was write longer content.

So naturally, I kept up with the trend and continually focused on longer content.

But as the competition kept increasing, my traffic started to stagnate, even though I was producing in-depth content.

Here are my traffic stats for November 2012 on Quick Sprout. 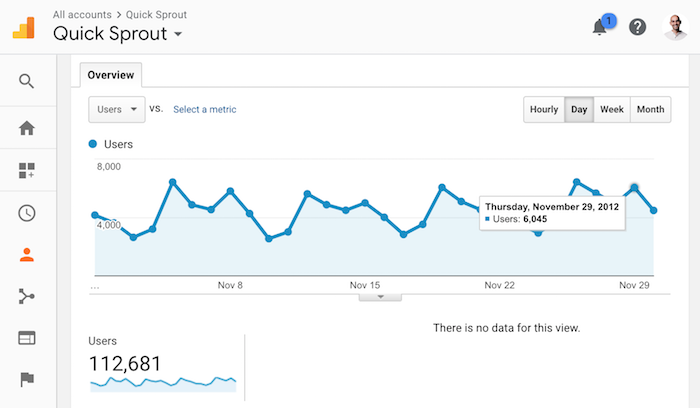 I understand that Thanksgiving takes place in November, hence traffic wasnâ€™t as high as it could be. But still, there really wasnâ€™t any growth from January to November of 2012.

In other words, writing in-depth content that was a few thousand words max wasnâ€™t working out.

Well, my traffic had plateaued. I had to figure something else out.

Writing longer, more in-depth content had helped me beforeâ€¦ so I thought, why not try the 10x formula.

I decided to create content 10 times longer, better, and more in-depth than everyone else. I was going to the extreme because I knew it would reduce the chance of others copying me.

Plus, I was hoping that you would love it as a reader.

It was called The Advanced Guide to SEO. 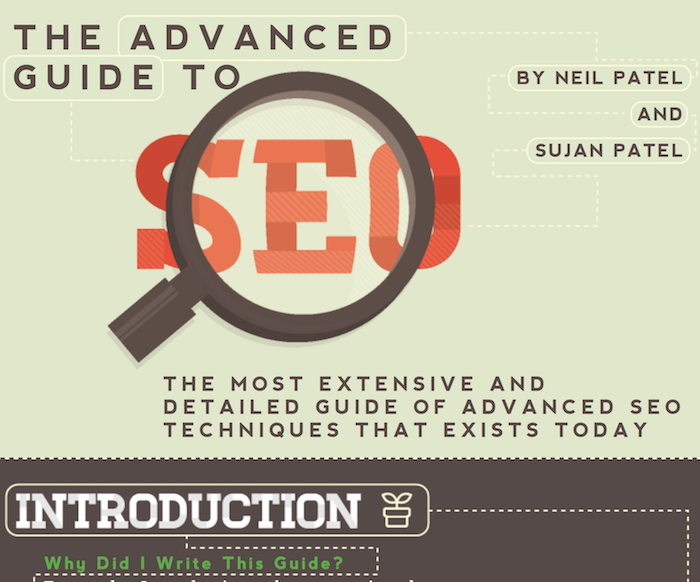 It was so in-depth that it could have been a book.

Heck, some say it was even better than a book as I paid someone for custom illustration work.

Now letâ€™s look at the traffic stats for January 2013 when I published the guide. 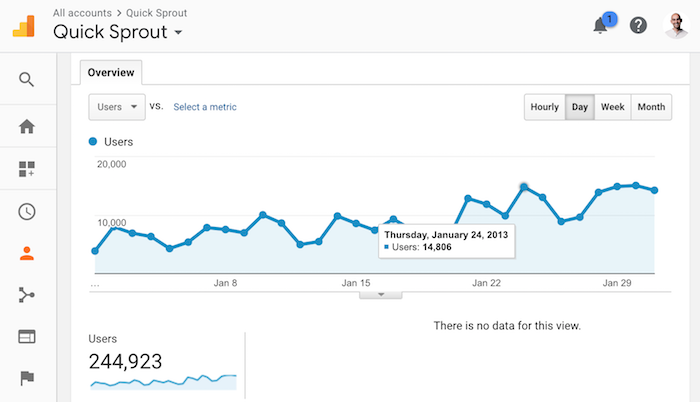 As you can see my traffic really started to climb again.

The only difference: I was creating content that was so in-depth that no one else dared to copy to me (at that time).

Sure, some tried and a few were able to create some great content, but it wasnâ€™t like hundreds of competing in-depth guides were coming out each year. Not even close!

Now, when I published the guide I broke it down into multiple chapters like a book because when I tested out making it one long page, it loaded so slow that the user experience was terrible.

Nonetheless, the strategy was effective.

So what did I do next?

I partnered up with other marketers and created over 280,000 words of marketing content. I picked every major subjectâ€¦ from online marketing to landing pages to growth hacking.

I did whatever I could to generate the most traffic within the digital marketing space.

It took a lot of time and money to create all 12 of these guides, but it was worth it.

By January of 2014, my traffic had reached all-time highs. 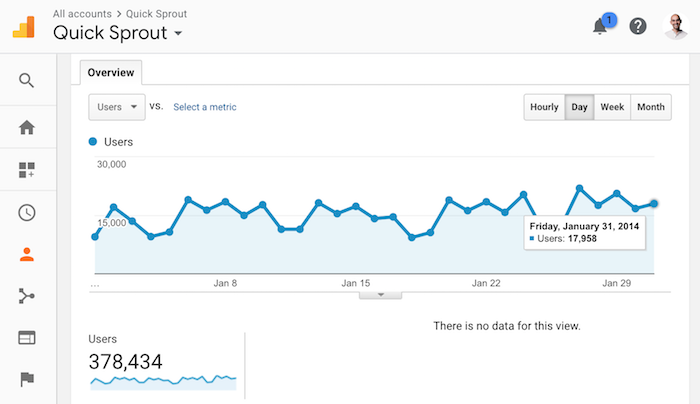 I was generating 378,434 visitors a month. Thatâ€™s a lot for a personal blog on marketing.

Heck, thatâ€™s a lot for any blog.

In other words, writing 10x content that was super in-depth worked really well. Even when I stopped producing guides, my traffic, continually rose. 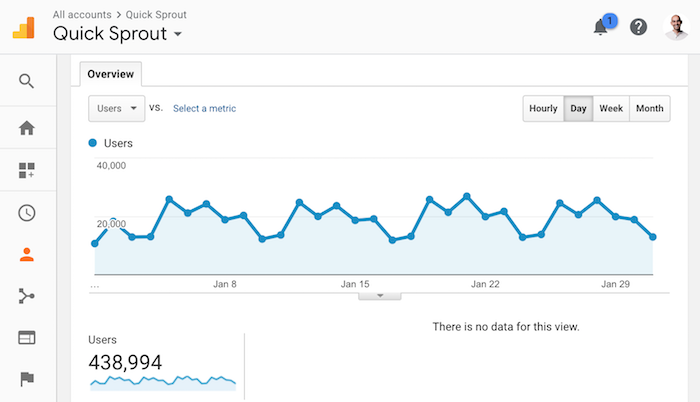 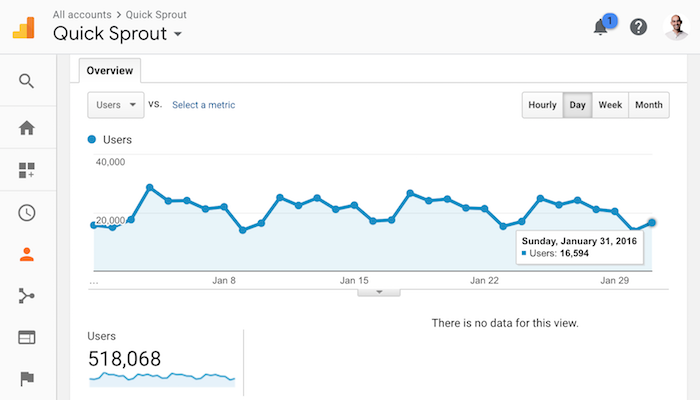 But over time something happened. My traffic didnâ€™t keep growing. And it didnâ€™t stay flat eitherâ€¦ it started to drop. 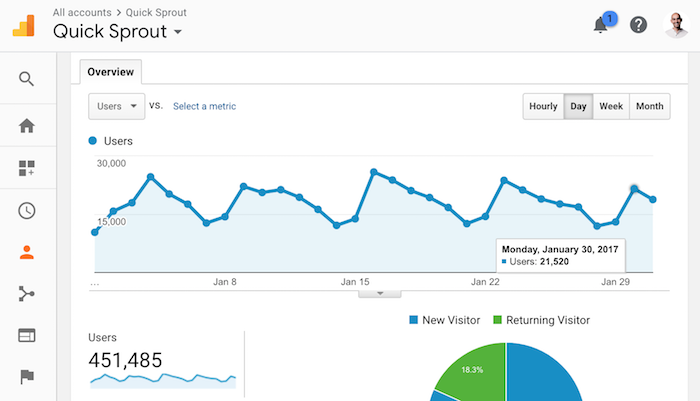 In 2017, my traffic dropped for the first time.

And in 2018 my traffic dropped even more: 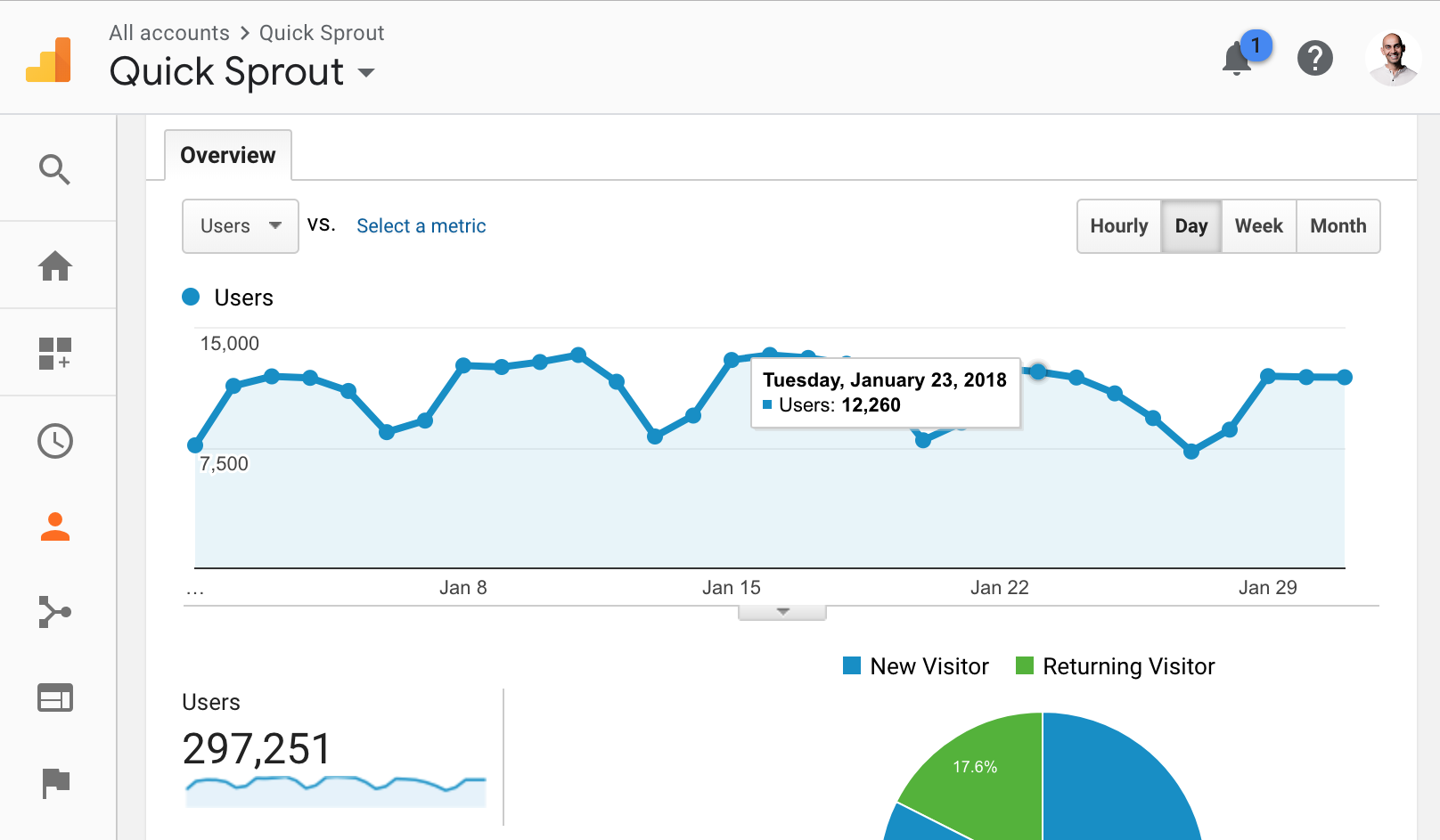 And sure, part of that is because I shifted my focus to NeilPatel.com, which has become the main place I blog now.

But itâ€™s largely that I learned something new when building up NeilPatel.com.

Similar to Quick Sprout, I have in-depth guides on NeilPatel.com.

I have guides on online marketing, SEO, Google ads, Facebook ads, and the list goes on and on.

If you happened to click on any of the guides above youâ€™ll notice that they are drastically different than the ones on Quick Sprout.

Here are the main differences:

Now letâ€™s look at the stats.

Hereâ€™s the traffic to the advanced SEO guide on Quick Sprout over the last 30 days: 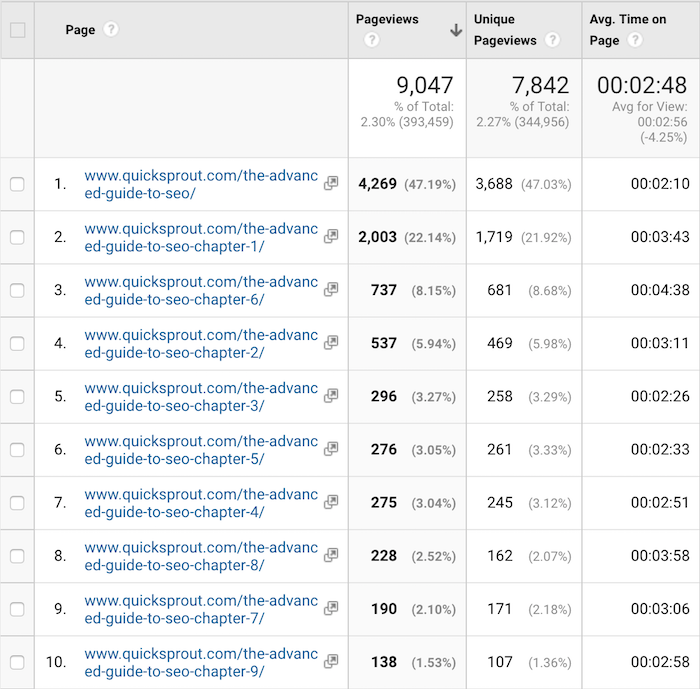 Over 7,842 unique pageviews. There are tons of chapters and as you can see people are going through all of them.

And now letâ€™s look at the NeilPatel.com SEO guide:

I spent a lot less time, energy, and money creating the guide on NeilPatel.com, yet it receives 17,442Â unique pageviewsÂ per month, which is more than the Quick Sprout guide. Thatâ€™s a 122% difference!

But how is that possible?

I know what you are thinking. Google wants people to create higher quality content that benefits people.

So how is it that the NeilPatel.com one ranks higher.

Is it because of backlinks?

Well, the guide on Quick Sprout has 850 referring domains:

And the NeilPatel.com has 831 referring domains:

Plus, they have similar URL ratings and domain ratings according to Ahrefs so that canâ€™t be it.

Google is a machine. It doesnâ€™t think with emotions, it uses logic. While we as a user look at the guide on Quick Sprout and think that it looks better and is more in-depth, Google focuses on the facts.

See, Google doesnâ€™t determine if one article is better than another by asking people for their opinion. Instead, they look at the data.

For example, they can look at the following metrics:

And those are just a few things that Google looks at from their 200+ ranking factors.

Because of this, I took a different approach to NeilPatel.com, which is why my traffic has continually gone up over time.

Instead of using opinion and spending tons of energy creating content thatÂ I thinkÂ is amazing, I decided to let Google guide me.

With NeilPatel.com, my articles range from 2,000 to 3,000 words. Iâ€™ve tried articles with 5,000+ words, but there is no guarantee that the more in-depth content will generate more traffic or that users will love it.

Now to clarify, Iâ€™m not trying to be lazy.

Instead, Iâ€™m trying to create amazing content while being short and to the point. I want to be efficient withÂ both my time and your time while still delivering immense value.

Hereâ€™s the process I use to ensure I am not writing tons of content that people donâ€™t want to read.

Because there is no guarantee that an article or blog post will do well, I focus on writing amazing content that is 2,000 to 3,000-words long.

I stick within that region because it is short enough where you will read it and long enough that I can go in-depth enough to provide value.

Once I release a handful of articles, I then look to see which ones you prefer based on social shares and search traffic.

Now that I have a list of articles that are doing somewhat well, I log into Google Search Console and find those URLs.

You can find a list of URLs within Google Search Console by clicking on â€œSearch Trafficâ€ and then â€œSearch Analyticsâ€.

Youâ€™ll see a screen load that looks something like this: 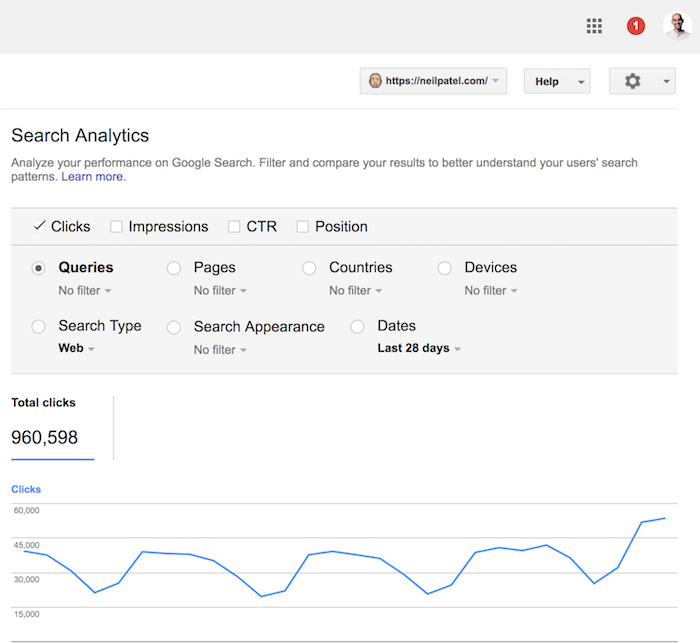 From there youâ€™ll want to click on the â€œpagesâ€ button. You should be looking at a screen that looks similar to this:

Find the pages that are gaining traction based on total search traffic and social shares and then click on them (you can input URLs into Shared Count to find out social sharing data).

Once you click on the URL, youâ€™ll want to select the â€œQueriesâ€ icon to see which search terms people are finding that article from. 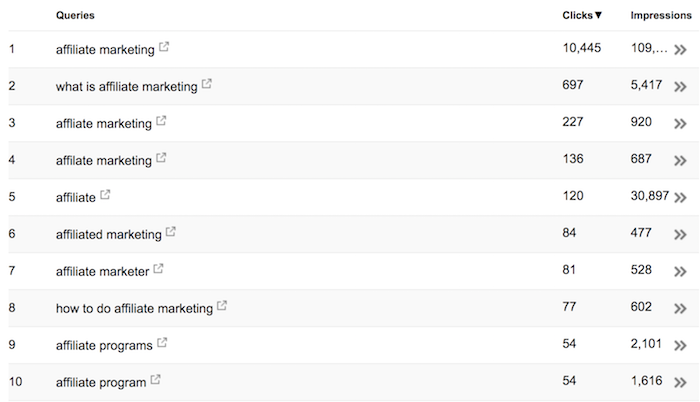 Now go back to your article and make it more in-depth.

And when I say in-depth, I am not talking about word count like I used to focus on at Quick Sprout.

Instead, I am talking depthâ€¦ did the article cover everything that the user was looking for?

If you can cover everything in 3,000 words then you are good. If not, youâ€™ll have to make it longer.

The way you do this is by seeing which search queries people are using to find your articles (like in the screenshot above). Keep in mind that people arenâ€™t searching Google in a deliberate effort to land on your siteâ€¦ people use Google because they are looking for a solution to their problem.

Think of those queries that Google Search Console is showing you as â€œquestionsâ€ people have.

If your article is in-depth enough to answer all of those questions, then you have done a good job.

If not, youâ€™ll have to go more in-depth.

In essence, you are adding more words to your article, but you arenâ€™t adding fluff.

Youâ€™re not keyword stuffing either. You are simply making sure to cover all aspects of the subject within your article.

This is how you write in-depth articles and not waste your time (or money) on word count.

And thatâ€™s how I grew NeilPatel.com without writing too many unnecessary words.

You donâ€™t know what people want to read. Youâ€™re just taking a guess.

The best approach is to write content that is amazing and within the 2,000-word to 3,000-word range, assuming you’re in a competitive industry. If your industry isn’t as competitive (and it lacks content online) then you can get away with posts under 1,000 words.

Once you publish the content, give it a few months and then look at search traffic as well as social sharing data to see what people love.

Take those articles and invest more resources into making them better and ultimately more in-depth (in terms of quality and information, not word count).

The last thing you want to do is write in-depth articles on subjects that very few people care about.

Just look at the Advanced Guide to SEO on Quick Sproutâ€¦ I made an obvious mistake. I made it super in-depth on â€œadvanced SEOâ€. But when you search Google for the term â€œSEOâ€ and you scroll to the bottom to see related queries you see this… 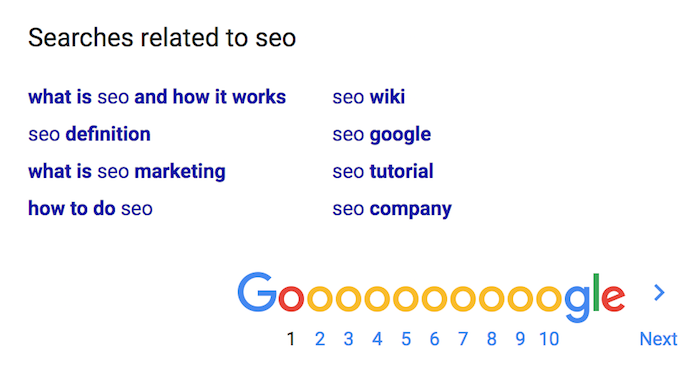 People are looking for the basics of SEO, not advanced SEO information.

If I wrote a 2,000-word blog post instead of a 20,000-word guide, I could have caught this early on and adapted the article more to what people want versus what I thought they wanted.

So how in-depth are you going to make your content?